How do we love Leopard? Let us count the ways!

Worn by everyone from royalty to rock stars, we are hardly the first to deem leopard print a neutral necessity. What leopard print portrays varies greatly. Historically, the leopard pattern has been valued as a sign of taste, wealth, luxury, and sophistication. While some regard the print as kitschy and punk, according to the writer of "Fierce: The History of Leopard Print," Jo Weldon, all these labels are correct. Here are some fun historical facts about leopard print which explains why we designed a whole leopard print bedding collection around the rockin' rosettes!

Throughout all these decades, the motif was still embraced by the upper ranks of fashion and home decor. Perhaps our appreciation of the print relates to the animal itself: frightening yet admirable, irresistible, and savage. The leopard print makes a statement in all forms -- cosmopolitan, luxe, rebellious, and sexy. “My weakness is wearing too much leopard.” Joan Collins

Regardless of the prints' most recent cultural evolution, we find leopard print attractive and daring. Leopards themselves are independent, adaptable, and hard to tame. The fur pattern that helps these dangerous animals blend in is the same pattern that makes a fashionable person stand out. You may not be a predator while wearing leopard print, but you sure aren't prey. A leopard never changes its spots, and our love for them will be endless.

To see how this influence takes hold in our products, take a peek at our Leopard Bedding and Home Decor Collection! 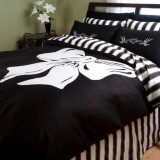 Create an outdoor sacred space with plants that speak to your soul.

Drawing inspiration from the magic of the night sky, Cocorrina brings Art Deco mystery to your home. You’ll never look at the moon the same way again.